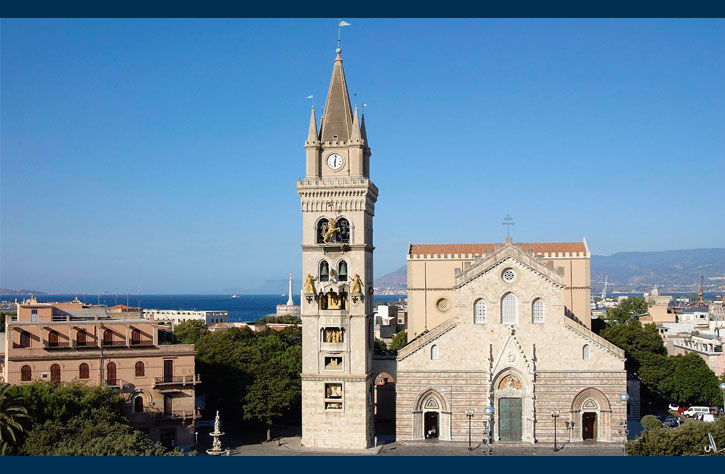 Built during Norman time, it was consecrated by the Archbishop Berardo in 1197, in the presence of Emperor Henry VI of Swabia and Queen Constance of Hauteville. Its history has been turbulent and it has been destroyed and rebuilt several times over the centuries.

In 1254, during King Conrad IV of Swabia’s funeral, the numerous tall candles set fire to the decorations put for the occasion and the fire spread to the wooden ceiling. 1300 saw a period of renovation and artistic enrichment for the Cathedral, initiated by Archbishop Guidotto de Abbiate, who commissioned the mosaics in the apse bowls and the decorations on the façade. The embellishment continued for several centuries.

During the 16th century Giovan Angelo Montorsoli began the Chapels of the Apostles and the decoration of the marble floor.During the 17th century new architectural and decorative elements in typical Baroque style were introduced, alterating the original outline of the church. 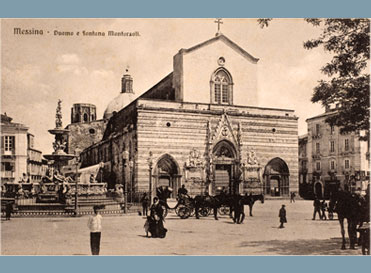 In 1783, an earthquake badly damaged the Cathedral, destroying its bell tower, 90 m. high, that was later substituted by two small bell towers placed on the side apses; a large dome was created in the centre of the transept.

On the 28th December 1908 an earthquake destroyed Messina leaving in its wake 60.000 victims and the city a heap of ruins.

The Cathedral was quite completely destroyed; only the perimeteral walls and the apses remained standing.

Archbishop D’Arrigo began the reconstruction, that was continued by the new Archbishop Angelo Paino.

The new Cathedral was consecrated on 13th of August 1929 and dedicated to St. Mary of the Assumption.

Unfortunately, in 1943, during the bombings of the WWII, several burning fragments fell on the building, starting a fire which lasted for two days. The fire destroyed all the decorations, even those who had been recovered after the 1908 earthquake. The marble calcified and the bronze melted in the heat.

Again it was Archbishop Paino who had to rebuild the church, that was reopened for worship, only four years later, in August 1947. The Pope Pius XII honoured it with the title of Minor Basilica. 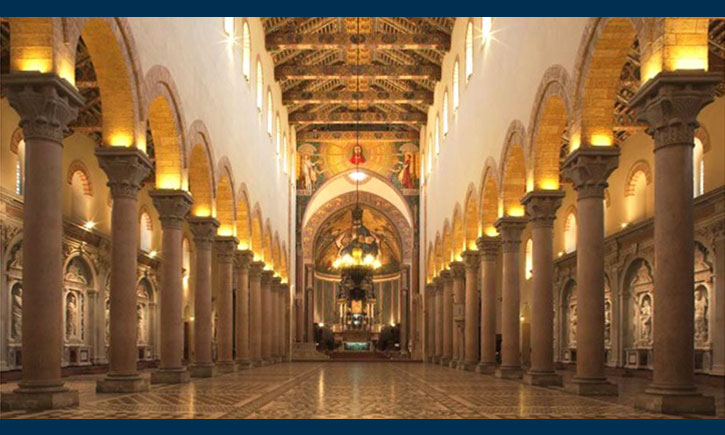 Despite the numerous destructions and reconstructions the Cathedral of Messina still fascinates visitors for its beautiful and elegant lines.

Inside the church, several tombs of archbishops survived as well as the mosaic on the left apse.Many works of art were destroyed and reproduced, such as the statues of the Apostles along the aisles, the canopy in the main apse, the central part of the mosaics in the right apse.

In the following pages you will find a description of the main monuments of the Cathedral, in order to appreciate almost one thousand years of art and faith.

TOURIST SERVICES
Cathedral audioguide € 3,00
Guided tours for groups are available in ITALIAN, ENGLISH, FRENCH and SPANISH, only under reservation