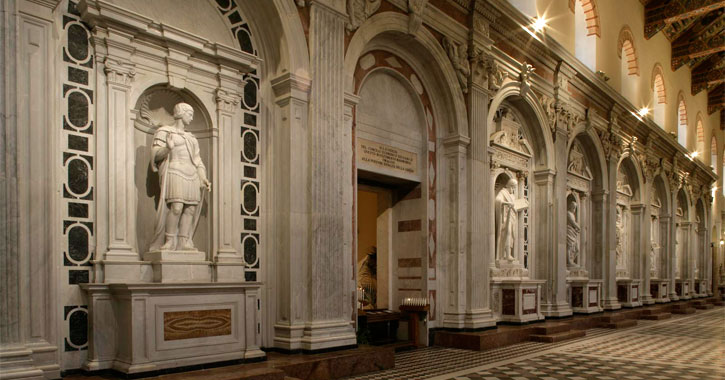 The first statue to the left represents Saint Vittore Angelica. It is a post war reproduction made by S. Cozzo. 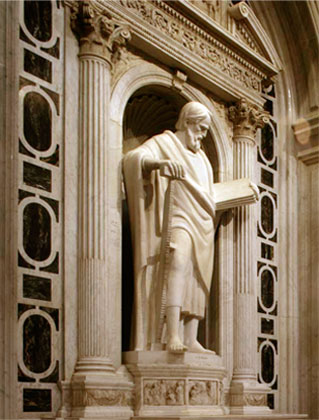 Close to the statue there is the Chapel-Baptistery. The door to reach it is richly decorated with leaf garlands and cherubs. It is similar to the one on the south side, also made by Rinaldo Bonanno from a design by Polidoro Caldara da Caravaggio. The baptismal font stands in the centre of the chapel. It is a copy of the antique 14th century one, which ones stood in the church.  There is a 17th century wooden Crucifix on the end wall.

Along the nave there are six chapels of the Apostles. In 1550 the Senate of Messina commissioned Giovan Angelo Montorsoli to do the project.  Unfortunately Montorsoli only succeeded in sculpting the first statue, Saint Peter, and the project was completed by other artists and the last statue was put in place in the 18th century. 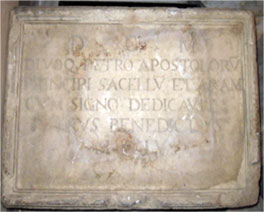 The Chapels of the Apostles were damaged in the 1908 earthquake and restored, only to be destroyed by the 1943 fire;  what we see today is a post war reproduction of the original. The order of the statues is: St. Simon, by E. Martini; St. Bartholomew by E. Assenza; St. Philip by M. Mazzacurati; St. John by G. Ciocchetti; St. Andrew by R. Aissanti; St. Peter by A. Bonfiglio.

On the right wall of St. Peter’s chapel a marble slab has been recently placed. It comes from  the original altar of the Chapel of St. Peter and refers the year 1555 and the donor’s name Pietro De Benedetto.

A wooden door gives the access to the north entrance of the church.  The marble door is richly sculpted in Gothic style. In the lunette a statue represents the Madonna and Child, 15th century.

On the left a 16th century door with a bust of St. Placid in the transom, open into the sacresty and Chapel of the chapter.

The impressive cupboards into the Sacresty are made of worked and inlaid wood, by fra’ Gregorio on the design of Adolfo Romano.

Going back to the Cathedral nave you can admire a beautiful bas-relief representing St. Jerome in penitence, probably made by Domenico Gagini in 15th century. The Saint is inside a cave, kneeling half-naked before the Crucifix; he has a stone in one hand in order to beat his breast in penitence. 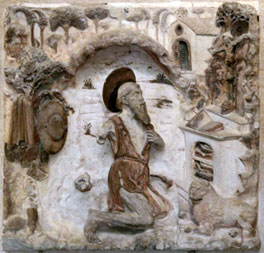 Close to the bas-relief there is the chapel of the Risen Christ; Federico Spatafora commissioned it to Gagini in 1592. It was destroyed in the WWII fire and is now a reproduction of the original.

Along the nave there are two funerary monuments of the Archbishop Luigi Natoli (d. 1875) and Archbishop Cardinal Francesco di Paola Villadicani (d. 1861), both made by Giuseppe Prinzi. The Archbishop are portrayed kneeling in prayer.

Under the arch that allows the access to the transept, on the side walls, two marble slabs have been recently placed. Made of Pros marble they refer the concession and confirmation of the duty-free, conceived by Emperor Henry VI of Swabia in 1197 and confirmed by his wife Queen Constance of Hauteville in 1198.