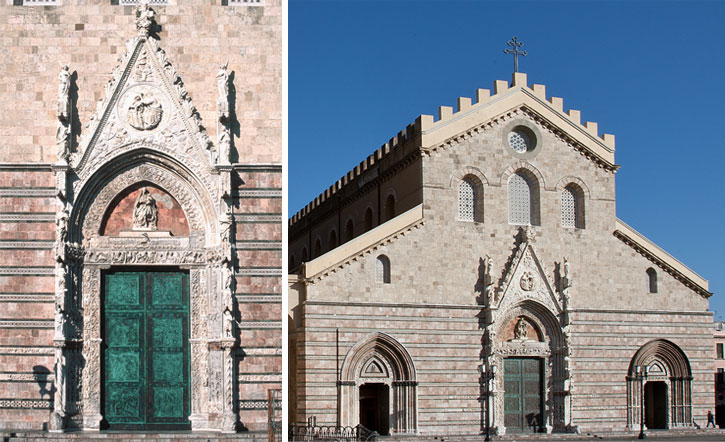 The Cathedral’s façade is richly decorated with elegant marble intarsia; in the lower part, both on the left and right sides of the main door, the intarsia are interspersed with bas-reliefs picturing the grape-harvest, sowing, weaving, the olive- harvest and the extraction of the oil, 14th century. The entire decoration was begun in the 14th century, at Archbishop Guidotto de Abbiate’s instigation, and was completed in the 16th century.

The left door, made in the 14th century, is decorated with spiral animal motifs; the lunette shows the enthroned Virgin Mary; the architrave has the Agnus Dei in the centre. The pointed-topped  door shows three tortile columns with plant-motif capitals on each side. The door remained almost intact after the 1908 earthquake.

The main door was designed by Antonio Baboccio da Piperno, in the 14th century, even if he sculpted only a little part. The sumptuous work was finished by different artists in the 16th century. On each side, a lion holds up a tortile column with a plant-motif capital. Above the columns are recesses with statues of Saints; from bottom to top, on the left: St. Barbara, St. Catherine, St. Peter, the Archangel Gabriel, an angel; on the right St. John the Baptist, a Saint giving a blessing, St. Paul, the Madonna of the Annunciation and an angel.

The cusp, attributed to Pietro de Bonate, 15th century, is framed with acanthus leale and is decorated with half-figures of angels, holding musical instruments or praying; a medallion in the centre shows the Madonna with joined hands being crowned by Christ; the top part shows god giving his blessing. 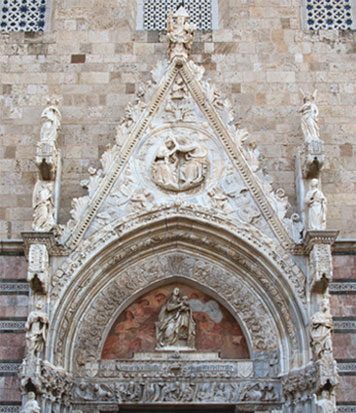 In the lunette, a statue represents the Madonna enthroned with Baby Jesus, work of G. B. Mazzolo, 1534; in the background a fresco shows a choir of angels with musical instrument, by Letterio Subba, 19th century.

The architrave represents Christ, giving a blessing, among the four Evangelists and their symbols. Above them is a Latin inscription in Gothic script and a crown in the centre; on either side two angels hold the coats of arms of the city of Messina and of the Aragons.

The door is richly decorated with human figures ascending vines, women with sumptuous robes  and head coverings, slender columns covered eith bunches of grapes , images of patriarchs, angels, scenes from the life of the Madonna and from the Apocalypse. 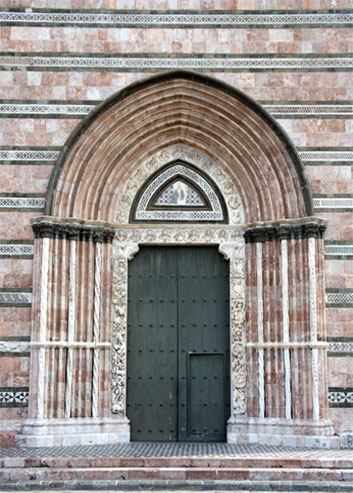 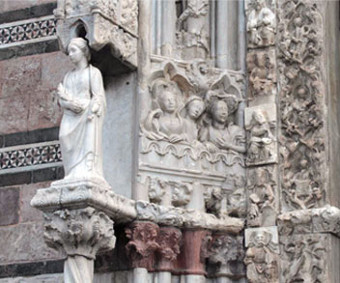 The right door, completed in 1518, is decorated in the lunette with circular images of Saints and Prophets. In the centre there is a post-1908 earthquake figure of St. Placid. The jambs are decorated with symbolical creatures, including the pelican, the phoenix and the griffon. Completely brought to the ground by the 1908 earthquake, it was put together again using the original fragments.