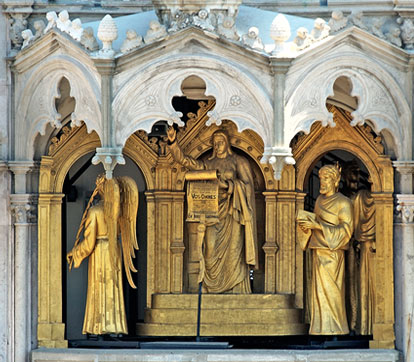 The scene represents the Madonna of the Letter, patron saint of the city. According to the tradition, in 42 AD St. Paul came to Messina to spread Christianity. Inspired by his impassioned words the people of Messina, sent their ambassadors to Jerusalem to pay their respects to the Virgin Mary. The Madonna gave them a letter addressed to the people of Messina, promising eternal protection to the city. The ending of the letter “Vos et ipsam civitatem benedicimus” ( I bestow my benediction upon you and your city) is still written on the base which supports the gilded statue of the Virgin Mary, at the entrance to the port.

In the scene represented on the bell tower, a little after noon, an angel brings the letter to the Virgin Mary followed by St. Paul and the ambassadors. Each character bows when passing in front of the Madonna